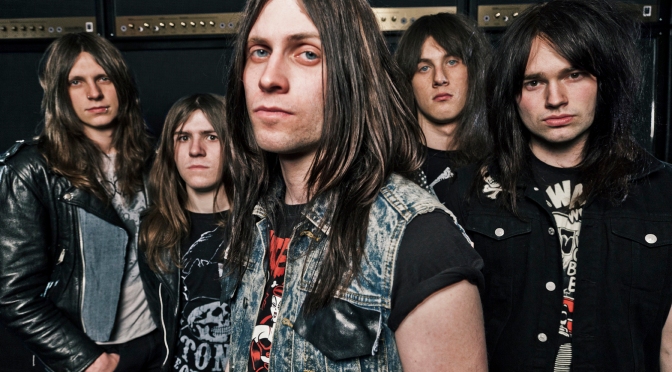 Let me take you back to another time, friends.  It was a day when men were men, women were women, and not every rock band wore skinny jeans and guyliner.  Bands like AC/DC, Thin Lizzy, and all their counterparts were dominating stages and airwaves.  These days, those bands are considered legendary, but their style and presence are long considered a thing of the past.

Well worry no more, friends.  If you like that style, then The Treatment is for you.

Formed in Cambridge, UK in 2008, this five-piece rock band is currently traveling through the US for their first tour of the country, opening up for rock icons KISS and Mötley Crüe on their not-just-cleverly titled “The Tour”. With their debut album, “This Might Hurt”, currently available for download on iTunes, the album also comes attached with their EP of covers, “Then & Again”.  San Supersonic had a chance to catch up with lead singer Matt Jones on the cusp of their show on August 12th at Cricket Wireless Amphitheatre in Chula Vista.

If you’ve had a chance to listen to their first single, “Nothing to Lose but Our Minds” (which you can right here), then you’ll notice that the band happens to be pretty classic sounding.  It’s less of a current style of rock, and has drawn a lot of comparisons to the earlier bands.  It was one of the reasons Nikki Sixx championed the band and was instrumental in getting them on board as the opening act of this tour.  “We couldn’t ask for more,” said Jones about the tour.  “We grew up listening to both bands, and I had posters of them on my wall.”

The craziest part is that these aren’t the only rock juggernauts these guys have already put in miles with.  They’ve also shared performances with Motorhead, Black Stone Cherry, and Alice Cooper among others.  Big name performances?  They’ve notched those too.  They’ve already gained experience playing at Download and Sonisphere, two of the biggest European festivals for music.

It’s easy to understand why Jones couldn’t ask for more. The group’s origins began in 2008, when Dani Mansworth began looking to start a band.  With him as the drummer, he quickly recruited Ben Brookland and Tagore Grey on guitar, along with Rick “Swoggle” Newman on bass.  After a six-month search for a vocalist, the group found Jones in Norwich and the road began for the five-piece.  The members of the band packed up and moved in with Mansworth and his father Laurie, who was no stranger to music himself.  The elder Mansworth has worked with such UK acts as More, Airrace, and Roadstar.  The group began almost daily practices, knowing exactly in which direction they wanted to go.  The sound is incredibly vintage for a band where all the members are in their late teens and early 20’s, but considering they list Aerosmith, AC/DC, and Thin Lizzy as influences, it should come as no surprise.  “We didn’t think we could be doing this all this quick,” said Jones.  “We all work hard at what we do.”

It’s easy to talk comparisons to some of these bands though, and often PR pieces will tend to use a lot of hyperbole when discussing a new band’s sound, strictly to get others to warm them up.  When Jones was given the chance to put the band’s style into his own words, he gave an opinion not far from others I’ve spoken with.  “We’re just a rock band.  We’ve got a classic rock feel with a youthful twist.”

The 14-track debut just premiered in the States on July 17th, being distributed through Spinefarm Records, and the upcoming EP features tracks that not everyone would recognize as “iconic” right away.  Picking tracks from artists like Canned Heat, Electric Light Orchestra, Slade, Jo Jo Gunne, and Chris Spedding, none of these tracks may possibly click in someone’s head.  The most notorious, at least people I spoke to can remember, is ELO’s “Evil Woman”, which is still not a track someone can point out instantly.

“We wanted to do songs people our age might not have heard of,” said Jones, and the selection work.  Instead of taking the safe route and tossing in something like “Back In Black” or “The Boys Are Back In Town”, the group threw in tracks like Canned Heat’s “Let’s Work Together”, or Spedding’s “Motorbikin'”.

The band is still young and there’s still several thousands of miles for this group to log before they near the number their heroes have traveled, but if their hard work is any indication, the group is more than up to the task.  “This Might Hurt” is available on iTunes, and “Then & Again” is actually available as part of the album on the iTunes store.  If you can’t see The Treatment in Chula Vista, they also play Irvine on August 14th.