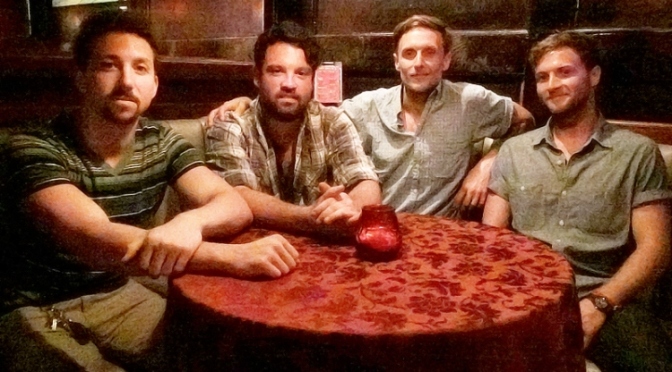 This is the kind of band that can jump between creating inspiring, dreamy and sometimes folky songs and composing modern instrumental pieces for a ballet. Yes, a ballet! I’m talking about indie rockers, Mercies, and when this trio of multi-instrumentalists came into town, they brought along with them their unique, vintage-inspired sounds, high energy rhythms, and a few surprise guests sprinkled along their crowd at the Ruby Room.

When I arrived at the Ruby Room, the guys were immediately happy to sit down with me at one of the dimly lit booths near the bar. Curiosity caused me to ask them first about the ballet music they created, which was commissioned by The Charlottesville Ballet in Charlottesville, Virginia. Lead singer and guitarist Josh Rheault and bassist Jordan Flower, told me that the process was obviously much different than anything else they had written. Even so, the guys included the ballet on their latest EP release, appropriately titled The Ballet.

“Initially we were going to treat it as a separate thing, and then we kind of figured we might as well release an EP and use the EP as a way to house the ballet. It worked out, timing wise.” Jordan and Josh told me, about their choice to include their instrumental pieces on the EP.  The guys have even more up their sleeves, as far as composition goes, as they also noted, “We hope to do a lot more work with other dance companies. We might be doing an indie film, scoring that.”

The indie film is currently in the works, and penned and directed by Nicole Eckenrose. The guys were fairly tight-lipped on the project, since there are so many details that still have yet to be established for the project, but just one listen to what they composed for the ballet will convince anyone that their future soundtrack endeavors will be highly successful.

The group was formed by Rheault and drummer, Sammy Dent, both of whom may have been seen in their previous band, the Deer Hunter. There’s always a “previous band stigma” that can follow some musicians around, but not for Mercies. The trio has successfully branded themselves as a must-listen kind of band, and they boast a sound that is unique, a little astral, a little old school, and a lot of interesting; a feat that I had to congratulate them on. Rheault noted that he spent nearly four years in Los Angeles, touring and writing with his previous project, before finally making his way back home to Connecticut where he eventually started Mercies.

Though New England is their home, the guys had to admit they were really looking forward to their San Diego show. Rheault recalled his last show in San Diego where he played SOMA, a venue that definitely stood out to him. He described the venue in vivid detail as he recollected that night, and added that, “People here seem to really like music and shows, and they still go to them. It’s a good place.” He’s even kept in contact with some of his San Diego friends, including local heavy hitters Pierce the Veil, who were all at the show, ready to support the band with rowdy cheers and generous applause.

The people in San Diego do love their music scene, but it’s also easy for a band like Mercies to draw a crowd on their tour when they can cater to indie lovers so well. At first glance, Mercies may seem like a hipster’s ultimate wet dream; however, as soon as one takes a listen to The Ballet EP, it’s really easy to distinguish a difference between them and some of the other bands that are attempting the same thing. The first difference is in their influences. Mercies successfully draws on some of the greatest sounds of old, making those sounds new and fresh and exciting again. “[Our] biggest influences probably all stem back 50, 60 years. You know: Beatles, Beach Boys, and Les Paul.” All of this is apparent in their EP, and in their Beach Boys cover of “In My Room”. This was quite possibly the best song for the group to cover, and one of my favorite tunes to hear that night, since it is just as good live as it is recorded.

Sometime in November, the trio plans to release a 7″ vinyl of their latest songs. “People usually get a CD and then chuck it, or lose it. With vinyl, it’s something to hold on to,” says Rheault. One thing is for certain, their mesmerizing sound transposed onto the clarity and quality of vinyl, is going to be a unique item that any music lover won’t want to miss.