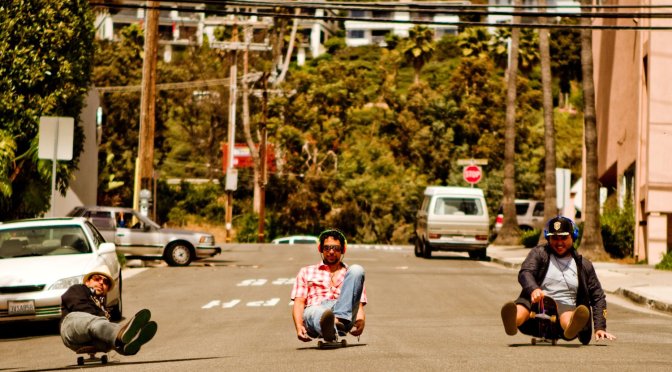 Yesod Williams dishes on new album, tour with Cypress Hill. Good news boys, girls, Rastafarians, islanders, and party people. If you’ve been anticipating some new music from Pepper, then you may just be in luck this year. Fresh off their tour with Sublime with Rome and the legendary Cypress Hill, the Hawaii natives turned San Diego locals of Pepper are ready for “Pepper 2.0”, as they call it, and they’ve got a lot in store for you.

So if you didn’t get to see them on theirn tour stops in 2012, which included the Chula Vista Cricket Wireless Amphitheater where I met up and spoke with drummer Yesod Williams, then don’t fret! Because odds are your fall music forecast is about to get a little spicy. I can tell you from experience that Williams, bassist Bret Bollinger and vocalist/guitarist Kaleo Wassman never disappoint, and their rowdy live attitude is just as zesty as their band name.

Their southern Cali show got off to a bit of a rocky start as they were waiting nervously for the arrival of their bassist Bret, but lucky for them they were on tour with some of the nicest guys in the business.

“The craziest thing was today, Brett almost didn’t make the show.” Williams told me, when I asked him to divulge in any interesting stories from their tour so far. “Kaleo was teaching Rome [from Sublime with Rome] bass lines so that he could step in.” Which might have confused Pepper and Sublime with Rome fans just a bit, but definitely would have been an interesting story to tell.

Fortunately the mini disaster was diverted, Bollinger arrived minutes before their start time, the guys played a raging set that proved that even the oldest people in the audience could get up on their feet and dance, and I spoke with Yesod Williams backstage after all was sang and done. Williams dished on how the tour with Sublime with Rome and Cypress Hill was going, and he had all glowing reviews.

“I remember when ‘Hits from the Bong’ came out, I sat in my room with the tape and listened to it and stopped it and rewound it and wrote down all the lyrics for it.” Williams practically gushes over extraordinary act Cypress Hill (who, by the way, should be a must see if you haven’t seen them live already!) “And everyone’s so nice. There’s no hierarchies out here.” Williams even explained that “one of the Sublime crew guys is about to give me a tattoo on the back of my calf.” I had to commend all three Pepper members on their amazing hospitality — they really knew how to make a girl feel at home — so it’s easy to believe that the three bands rounded out a big, warm tour-family experience.

Bassist Bret Bollinger got away with being late this time, since the guys are now San Diego natives who also happen to really love this city. “San Diego’s definitely our second home. We started the band of course in Kona [Hawaii] where we’re from, and then we moved over here in ’99 and we didn’t know anything.” Williams said. “It was one of those things where we almost got raised in San Diego, as far as our music career goes.”

And their favorite Mexican food in San Diego? “It’s not open anymore, but there was a place in Oceanside called To’s, and it also kept us alive. When we first moved to California we had no money, but they had these really cheap bean burritos that we would order an extra tortilla with and it would basically feed us for two or three days.”

I was most anxious to get the details on future Pepper releases, especially because it has been nearly four years since the guys had a new release. “Everyone don’t worry!” Said Williams, already beaming with enthusiasm. “I promise to God that Pepper is going to have a new album.” It’s obvious that Williams is ready for some fresh blood, as he lamented, “It drives me crazy! I sometimes wake up at night like ‘God we have no new songs to play.'” — which may have been why the band opted out of playing their mainstream success “Give It Up” during their San Diego performance.

The trio is working with talented and diverse Matt Wallace (whom Williams affectionately called Matt Walrus), a producer who has dabbled in everything from Spin Doctors to Deftones to Faith No More, a real favorite of Pepper. Williams assured me that the album will be out “sooner rather than later”, since Pepper has been taking most of the year to work on this release.

When a band puts that much dedication into a recording, you know it’s going to have the attention to detail that is appreciated and loved by old fans and new fans alike. If you’re already familiar with Pepper, you may remember a really unique 3D tour video release created for the song “Drunk Girl“, on their 2010 EP Stitches — which even came complete with throwback red and blue based 3D glasses. (I still have my 3D Pepper glasses!)

“That was in 2010, we released the EP Stitches, and we went into it with the intention of making a full album. We got in [the studio], and were like….’I think four of these songs are ready, the rest aren’t.'” Now those additional songs are polished, and they are going on the new Pepper release that’s currently “95 to 98% done” according to Williams. “It’s so refreshing to have a new song to play.”

“When the new album comes out, we’re going to be hitting it hard.” Says Williams; but don’t worry, a band like Pepper is not all work and no play. “Making music and having fun is the main thing.” Williams adds, rounding out the idea that a brand new tour with brand new songs — and brand new rowdy experiences — is going to be the highlight of Pepper’s 2013.