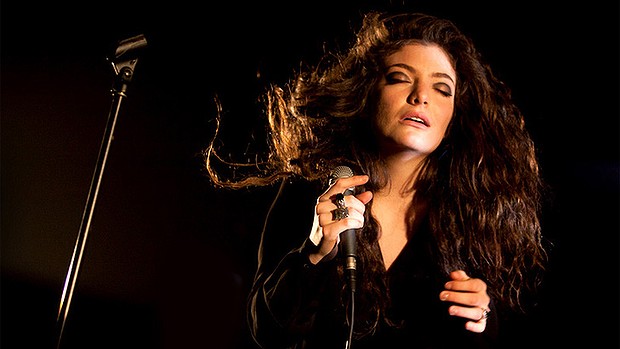 To all the haters who call Lorde awkward, weird, or unusual: Go back and watch her performance, any performance, and take a second look at what makes her a really fascinating artist.
She sounds like the recording. She feels the words as she sings. During her Grammys performance, she hit every single mark she needed to, making her timing eloquent and different enough to not be an exact regurgitation of the record. She knew exactly when to end the song and did it with finesse that said not only is she an unusual artist, but she’s an unusual artist who takes her craft seriously and follows her cues — cues that were no doubt rehearsed at least once for the award show. In the eyes of a producer, a stage manager, a musician on stage with her; she was the perfect artist to work with.

Not every artist can run on stage and sing off-key while diddling themselves with a foam finger and twerking with a flat ass. Different is good. If you only want to see booty shaking with your pop performances, then you’re not truly a fan of music; you’re a fan of the grandeur. (And hey there’s nothing wrong with that. Entertainment is definitely a “to each his own” sort of venture.) But Lorde isn’t that. She is, despite her awkward movements and wicked grins between lines, a picture perfect performer and here’s why: Lorde is completely comfortable with being herself on stage.

Do you remember your last public speaking project? The last time you had to stand in front of a group of peers and talk about something or recite your paper or debate a topic? The way you felt that one night when you and your friends randomly stepped into that karaoke bar? If you’re not a performer, that’s probably the closest you’ll get to being on stage, and I bet you were not even 20% comfortable with being yourself up there. Now imagine that same scenario if you had been comfortable in your own skin. Kind of hard to fathom, isn’t it? (No digs here at those who don’t perform – I am a performer and I am not even slightly comfortable playing piano on stage, and I’m only partially comfortable with being myself while public speaking.)

Lorde is 100% herself. She gave her entire body and soul, knowing that you’d say she was “weird” or “different” and hopefully not giving a damn. Because as long as she is giving all of herself in her craft, she’s a picture perfect performer. And no amount of internet comments can really change that, can it? So I challenge you today. Go back and watch her performance, and see if you can spot anything, other than the “Tyrannosaurus Rex hands”, that is out-of-place.

Despite this fact, not everyone is going to be her fan, and that is expected and acceptable. But just remember, when the internet is looking for another reason to ridicule an artist, it usually falls on deaf ears. Because at the end of the day, when a performer pours their self into their music, free to be who they want to be and not mold into what the mainstream media is used to creating, they are — in my eyes at least — doing something very right. Lorde is still too young to truly be perfect, (and really, is there such a thing? Some artists just continue to get better with age like a fine wine.), but she’s well on her way to solidifying herself as an artist that will never cease to surprise and hopefully amaze you.