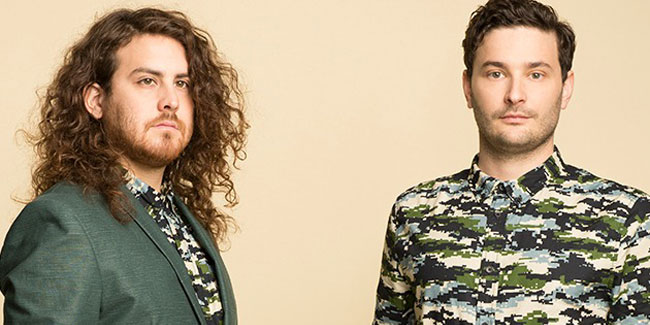 So the Oscars are this weekend. That’s happening. But there’s also a slew of shows that you cannot miss, all with some musical acts that I’m sure even the Academy would find pleasing. So without further ado, we present to you the top shows that YOU need to see this week.

Best Music Designed to Get You Dancing

And the award goes to…indie pop duo Dale Earnhardt Jr Jr, who will be gracing the perfectly dark and alluring Casbah this Thursday. With music that is classic and witty, modern and upbeat, it’s no wonder that Dale Earnhardt Jr Jr has continued to be a favorite among fans of indie pop and rock. The duo is riding high, fresh off the release of episode one of a documentary titled Wherever We Are, which is a must see if you really want some insight into how a humble music project can become so big so quickly. As multi-instrumentalist and vocalist Joshua Epstein put it, “I remember when we were asked about playing here, my response was ‘there’s no fucking way that that many people are going to come see us’.” – in reference to their nearly sold out Detroit show at the Masonic Temple. The people love them, and the band’s momentum in the music industry is testament of this fact.

Right now, I cannot stop listening to their tribute to the internet meme, “All Your Base All Belong to Us” — seriously one of the most addicting things I’ve heard in a while. So hear it live (fingers crossed that they pull out a song like this), and see if you can fight the urge to take part in the dance party that surrounds Dale Earnhardt Jr Jr. (Spoiler: you won’t be able to resist!)

While you wait for the show date to come, download their latest EP Produce for free, via their official site.

For Fans Of: Phoenix, Gardens & Villa

Best Use of Nintendo References

Here to accept this award is hip hop musician and rapper KYLE, who has gained a multitude of fans for his down-to-earth style and true-to-nature lyrics and creative references — including the song “Sex and Super Smash Bros” which is about, well, sex and video games. Ladies love his voice and his guy-next-door attitude; fellas love the kind of hip hop that they can actually relate to. There’s something for everyone with KYLE, who can please even the biggest hip hop connoisseur.

His latest music video release, “View From Hollywood“, is just the right amount of honest and real, with lyrics that bring a meaning and understanding to the typical themes repeated in hip hop today. KYLE raps, “Making them hate me, but I’ve never hated them/Always been focused on making a way for them/I spend a third of my nights trying to pray for them/But they can’t hear it because I’m far away from them.” And once you hear that, as a listener, it’s easy to tune right in and nod along to the beat.

KYLE is on tour with fellow up-and-coming hip hop act G-Eazy (another impressive rapper who’s not afraid to be himself), and they will be playing at SOMA this Saturday, March 1st.

For Fans Of: Childish Gambino, Chance the Rapper

This Friday at the Griffin, San Diego CityBeat will be celebrating its Local Music Issue by throwing a little party – complete with some of the best SD acts around and complimentary beer. Bluesy and soulful rockers The Heavy Guilt will be crooning your every indie heart’s desire, and Ed Ghost Tucker will feature their extremely unique take on jazzy, beachy folk tunes. Rounding out the lineup is Idyll Wild, whose indie rock jams were eloquently described as “Half dance-y, half druggy” by Three B Magazine; and unique hip hop/electronic act We Are Sirens offers music fans hard-driving tunes featuring a fusion of smart lyrics, edgy electronics and heavy drums.

But let’s be honest, we already had you at “free beer”, right? Those who RSVP and come early can bring up to three friends with them and sample Goose Island Craft Beer, all while enjoying some of the amazing music that this city has to offer. This needs to go on your calendar ASAP, so RSVP for the event at The Griffin’s official site here.

For Fans Of: Everything, from The Black Keys to My Bloody Valentine to Grizzly Bear to Major Lazer…

There you have it: several reasons to get out this week, whether you’re looking to dance, drink, head bang or go with the flow (or all of the above), San Diego has got you covered.

One thought on “Award worthy performances in San Diego this week”