Hey Rosetta! are coming to San Diego, and they’re bringing their beautifully arranged, dreamy sense of alt pop with them. There’s a lot that goes into a multi-instrumental project such as this, so we spoke with the group about working together, navigating the indie music scene, and the real human experience of music.

If you haven’t heard of Hey Rosetta! yet, get ready for the perfect landscape of emotional pop infused with dynamic sounds, emotional waves of lyrics, and well orchestrated melodies from an abundance of instruments — all coming together to form songs that make the live music experience for this group especially haunting and memorable.
.
Their fans have hailed Hey Rosetta! for their performances, giving this group a strong reputation of bringing an energetic live show to your eyes and ears. Vice‘s Noisey recently praised, “Hey Rosetta! also happens to be one of those rare bands whose live show is an experience to behold… altering you through sheer force of will.”
.
Not only do they command the stage live, but they also put a lot of heart into the creation process of their songs. In this interview, we go in-depth on how Hey Rosetta! works as a team and what goes through their head right before one of their stunning performances.
. 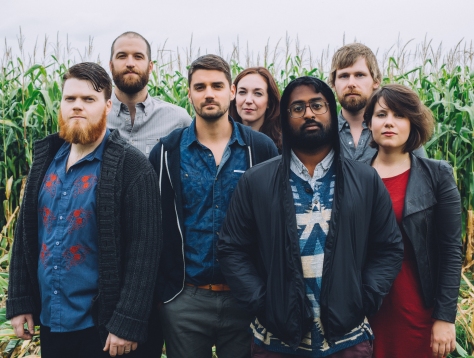 .
On working with so many musicians in their group:
Generally speaking the only issues that arise have to do with space, both physical and sonic. It’s just difficult to get everyone up on stage and comfy, and not tangled up in a web of cables. Sonically, it takes careful consideration to fit everything in the right place. We used to always struggle to include everyone in every song, and had a hard time mixing it all together. These days, I think, we try to approach songs a little more organically, and not force an instrument in the mix for the sake of having it. That being said, there are still tons of layers, but you have to try to accentuate the right thing at the right time.
.
Being in the studio:
It’s really fun to have that many people in the studio, because you can really ride the waves of different people’s energies. I, for one, come in swinging in the morning, but hit a wall hard in the mid afternoon. Some people take longer to get going, but carry on throughout the day. You can really take advantage of another person’s energy and enthusiasm when your own is starting to wane. That, and it’s great to have several creative minds focusing on the same task in the same space.
.
On how they want their fans to experience their music:
I hope people can take away some real feeling from it. Maybe they may get a strong connection to a lyric, or get into a groove, or even just get a high from being part of a real human experience. I fear too much of our day to day is spent staring at pixels, so if someone can have a genuine interaction and take something positive from it then we have succeeded.
.
Pre-show rituals for the band:
We all gather round in a circle and try to calm ourselves and think positive things. It can be difficult to be on the road a lot and constantly putting yourself out there in front of an audience. It’s nice to just take a minute, all of us together, to breathe and get in the right mind set.
.
Working through busy tour schedules:
Well, we really toured the heck out of the last one. We threw it out to whoever wanted to hear it. North America, Europe, UK, Australia. These are all different markets and it takes time to get out to all of them. It’s really hard to get into a creative place when you’re running around the globe, so we had to take some real time off to focus on the writing. We also took more time in the studio to experiment which is a luxury we had never really had before.
.
Hey Rosetta!: Morning people or evening people?
Definitely evening people. The job kind of dictates that.
.
On making albums for the indie music market:
It’s hard for me to say where the indie market is going. There are so many artists out there who are only producing singles, and there is a huge market for it. I think for us, we’ve always been into writing whole albums. If those happen to include a few singles then that’s cool, but has never really been our focus. Thankfully there seems to be a market for that too.
.
How they write fluid, longer pieces:
I think all you can do is try to write honestly. If you get a feeling that a song needs more stuff, then you kinda go with it. If short and sweet seems to be the vibe, then you go with that. You just need to find a way to allow the song to be what it wants to be without getting in the way.
.
.
.
Best beard in the band goes to…
Definitely Romesh. Very high thread count.
.
They’re currently on tour celebrating their recent album Second Sight, so make sure to check out Hey Rosetta! this week at Soda Bar, where they will put their spirited music into action and show fans why they are considered such a vibrant live experience!
.