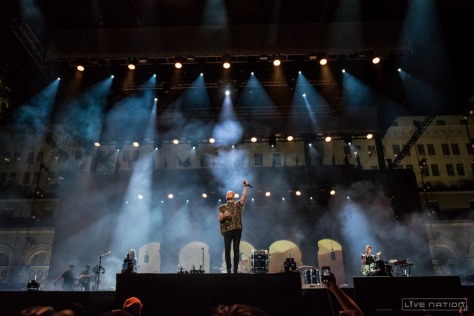 Now, I am honestly not the biggest fan of watching pre-recorded concerts from a TV or theatre. Mainly because I am a selfish girl and I like to experience shows first hand. So going into this Imagine Dragons experience and watching from a theater seat rather than viewing it live from Toronto where it was filmed  seemed somewhat anti climactic, yet I was intrigued all at the same time.

Dolby hosted this preview showing of The Smoke and Mirrors Tour cinema experience, so naturally the sound was impeccable. They along with Fathom Events, Cinemalive, and Eagle Vision helped bring this thing to life. If all concerts were filmed like this one — beautiful shots, fluid camera movements, and  insane editing skills — then I would be a fan of watching concerts on DVD or going to watch them in theaters because, wow. I had to stop myself from cheering and clapping a few times during the film because I was so wrapped up in what was happening in front of me.

Dick Carruthers did such an amazing job at directing this show case. I truly felt all of the emotions one usually does during a concert, but it was enhanced because I got to see things that would normally be obstructed by a taller individual or lack of a close seat to the stage. If the music was rapid and intense or slow and powerful, the camera shots and angles would mirror that emotion. Seeing and hearing songs like “Gold, Smoke and Mirrors” and even the band’s version of “Forever Young” shot and recorded in such a beautiful manner was such a cool experience.

I really can’t give all the credit to the people who made this movie. It’s obvious that Imagine Dragons are an amazingly gifted band. Daniel Coulter is the definition of a front-man and I honestly never realized how diverse his range was until I got to see this movie. The hard work and charisma that went into that performance was some of the best I’ve seen. I mean these guys are crazy talented, all of them sing and play multiple instruments and this is very much displayed throughout the show. I think this is a must see, not only for Imagine Dragon fans, but for people who can appreciate a truly well done film.

If you also want to check this out for yourself, this one time event opens today in select theaters.