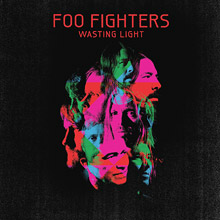 Since tonight is THE concert day of all days, I might as well write a review of the Foo’s latest album. You don’t know this, but I’m the hugest Foo Fighters fan who has never seen them perform live before. Tonight will be the first night that I see

these iconic hard-hitters of music hopefully rock my socks off at the Viejas Arena. Rad. Rad, indeed.

Since I can’t contain my excitement for tonight’s festivities, (oh yeah, they’re also playing with Mariachi El Bronx & Cage the Elephant – maybe I’ll review those albums as well), I’ve decided to review the album that has probably been reviewed way too many times already.

Wasting Light…first of all, can I just say that everything done in regards to promote this album was absolutely genius. The Foo Fighters know their fans, and they know how to keep you wanting more. They also know how to make you wish you hadn’t wanted so much more, as seen in their viral porno-esque venture, ‘Hot Buns’, but that is a whole other story. If you’re not a fan of this band, become one. Who else will give you the opportunity to see intimate secret shows in their headquarters of Los Angeles, as well as play a garage tour across America? That’s how amazingly cool these guys are. Of course, I’m biased but you know what, you can get over it, because I’d still think they were cool even if I wasn’t a fan.

Don’t forget the White Limo tour, which I will admit confused the hell out of me. I don’t know why I was expecting Dave and Taylor to step out of a White Limo, shake hands, kiss babies, buy California burritos, and then head on their way, all while bursting their album from speakers attached to the top of the limo. Yeah, I might have dreamt that one. But despite the fact that the band wasn’t on that tour, and it really wasn’t a tour, it was still a lot of fun for the fans, and that’s what really counts.

Without further ado, because I realize now that all my kiss-assery will not be seen by the Foos, here’s my review of the album Wasting Light.

First and foremost, previous Foo Fighters fans might be hesitant to enjoy this album. Two words have been repeated over and over again when it comes to their latest venture, and that would be ‘Arena Rock’. Pros of arena rock: It’s awesome. It’s awe-inspiring. It can melt your face off, and it’s fun when you go to those shows packed with thousands of people. Cons of arena rock: It’s arena rock. It might be fun to pretend like you’re in a stadium while blasting this album in your car, but at the end of the day a true Foo Fan is going to miss the dynamics that Dave Grohl’s raspy voice can miraculously deliver. And when he really tries, he really can deliver. That’s not to say that he didn’t try with this album, but the intensity behind the songs is on a completely different (almost plateaued) level, that will possibly delight those who haven’t heard the Foo Fighters that much, and probably fall flat (uh, pun intended) with those who are devoted Foo-ists.

Some of the best songs from the album have yet to be released as singles, which makes me wonder which direction they’re going with this and who’s pulling the proverbial label strings. While “Walk” seems like a perfect anthem to sum up an album like this, it’s cinematic display of grandness screams “finale”, not “random single from the middle of the album”, which is where they placed its release. It’s probably why the band chose to end the album with this song; now if only they had applied that same mentality to their single releases and made the fans wait a little bit longer for this powerful rock anthem.

Hopefully some of the more unique songs from this album are not ignored. “Dear Rosemary” and its multitude of instrumentation deserves some recognition. And if the vocal dynamics don’t get you, then maybe the lyrics will: “Truth aint gonna change the way you lie. Youth aint gonna change the way you die.” That’s a fact, straight from the bible of Fooism. The track “These Days” silhouettes some older Foo Fighters’ styles, a la In Your Honor, not the fast-paced heavy hitting album on which it’s contained. It’s easily one of my favorites, and reminds the haters that yes, there is a little bit more than just stadium rock on this album. A little bit.

This evening, however, I will get to see a lot of these songs performed live, and live performances can often change opinions.