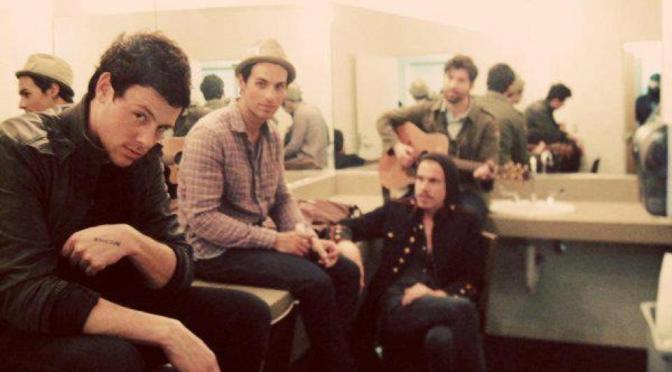 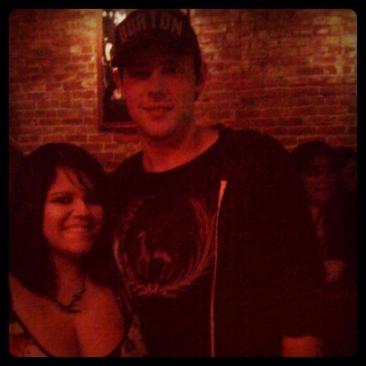 Sometimes we come across an artist who is not only beautiful as a person, but also as a musician. And sometimes those artists struggle with various things, including addiction. One of those artists was Cory Monteith: star on Glee, but who I knew as the talented drummer for Bonnie Dune.

I heard of this band many years ago while I was in high school. I knew some of the people who were in the band. Years passed, and I heard of them again, this time with a new drummer, one many people recognized for his vocal and acting skills on television. My friend’s band The Honey Trees was opening up for Bonnie Dune, so I decided to go. After their set it was Bonnie Dune’s turn. I instantly fell in love with the amazing harmonies, the vocals, and the way all the instruments came together so beautifully, you felt yourself plucked out of where you were, out of everything that was going wrong or worrying you, and out in the middle of a story. It was only you and the band. That’s how those artists made you feel, Cory included.

After the show, he came out to sign autographs and take photos. I knew I had to meet him. When it was my turn, I looked at him and I said “You were phenomenal. I know a lot of musicians, I’ve known every drummer this band has had. You were amazing. You played beautifully. I just had to say that you’re a great drummer. ” He looked at me, with genuine eyes and an authentic smile, and said “thank you”. We took our photo then I left.

Years passed, and I heard of him entering rehab for drug and alcohol addiction. I heard a lot of negativity about this and I thought of musicians, artists, actors, and other people who have gone through similar. Imagine yourself going through the pressure of what they deal with. It’s not so easy. Addiction is a disease. There are artists who can push through it such as Russell Brand,  and some that even after trying so hard, just can’t, such as Amy Winehouse, Jimi Hendrix, and Janis Joplin.

Months later, I heard of his passing. Heroin and alcohol is what they said. I am brought back to my good friend, an amazing musician as well, who died from an overdose just months before Cory passed; and it all seems real again. I break down. I think of his band mates, friends, loved ones and family. I break down for a bit and it’s hard.

People talk about the actor and celebrity factor of it all, but others have come to forget he was a musician as well. This was someone whose drumming could calm the most panicked hearts. I cry to think we will never hear it live again. We are just left with his memory, the recordings, and photographs. This amazing musician, gone too soon. This amazing artist, we will always miss.

Addiction is real and it affects millions around the world daily. If you or anyone you know is affected by this, talk to them. Talk to someone. Get help. Music culture is a family, and we are here to help.

Each week, TheIndieSD.com would like to feature your true and personal stories about meeting your favorite musician. Indie bands have some of the most social and outgoing musicians, and many times people have been given the chance to speak with them after shows, take photos, and simply discuss how their music has touched our lives! If you want to share a story about meeting your favorite indie artists, let us know by sending an email to info@theindiesd.com, and it could be featured on the site! 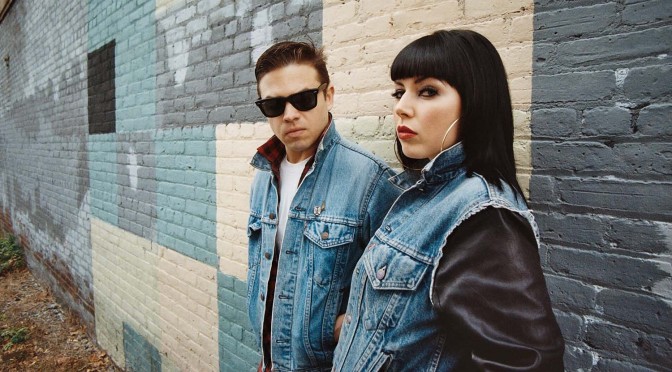 What’s better than free tickets to see Sleigh Bells live at 4th and B? Getting to canoodle with Alexis and Derek of the band. Oh wait, what’s even better than that? Getting your boob signed by the feisty lead singer. Okay, okay, let me explain the night and subsequent party that was Sleigh Bells.

First of all, the concert gods are on my side. I don’t win anything. I didn’t win the Mega Millions (yes, I bought a ticket.) I don’t even win Bingo. So when I received an email from Sleigh Bells stating that I had won two tickets to their April 3rd show and that my name would be on their guest list, I was fairly convinced that it was some sort of evil April Fool’s Joke.

Just as I started to narrow down the list of people who could have possibly done this and therefore needed to be punished, it dawned on me that yes, this was real. I had actually won something. Everyone gets to win something at least once in their lives, right?

Despite the show being on a Tuesday, I dragged a friend along and headed out to 4th and B, with high hopes and aspirations for how the night would turn out. I’ve seen Sleigh Bells live before, so I had a fairly good idea on what to expect; however, when I saw the band, they were just a freshman in the music world and were opening for a rather large festival. But this night was different, as we all got to share in popping the proverbial cherry on Sleigh Bells’ first ever headlining show in San Diego.

Dubbed a “no-genre” band by some, Sleigh Bells is a mixture of noise-pop riffs over hardcore-influenced drum patterns and booming bass lines that would make any hip-hopper proud (as if to solidify this, they played Biggie Smalls and others while we waited for the band to take the stage.) Their sophomore album Reign of Terror dives more into harmonies and experimental guitar riffs and steps away from some of the bass-heavy dance-ready tones of their debut album, but the songs still scream “get up and move!” Given all of that, and since this wasn’t my first time at the rodeo, I knew that Sleigh Bells can be a bit of a party. If you’re not moving, you’re singing. And if you’re not singing, you’re screaming. And if you’re not screaming, you’re opening a pit in the middle of the crowd. One or all of the above.

The New York based duo has a need to be loud, one that I have experienced and yet it still managed to surprise me on that night. Their stage was simply adorned with about twelve Marshall amps (R.I.P. Jim Marshall), which my friend stated was “a lot of fucking amps.” I noted, “well, they’re obviously for decoration.” Until the first guitar note came booming through the entire venue. Then I had to turn to my friend and yell, “….I think they’re using all the amps!” Despite the intensity of volume, the sound was amazing — though I am biased since I’m kind of deaf. Always bring your earplugs, kiddos. Never the less, Sleigh Bells is a band that likes their music loud, so they’ve definitely managed to perfect the art of getting it that loud and making it sound good at the same time.

There weren’t any pits involved on this Tuesday night (but Alexis did acknowledge the brave souls who attempted to get one going), but there was plenty of movement, including the energetic lead singer working all angles of the stage to make sure even the people in the back were on their feet. I chilled up front stage right, smack dab in front of former Poison the Well guitarist Derek Miller. Wait, did I say chilled? What I really meant was I sang my fangirl lungs out and tried my best not to accidentally trample anyone in the process. Despite being on the opposite side of the stage, Alexis attempted to defy the laws of stage physics and stretch her microphone cord to our side on more than one occasion, prompting a resurgence of energy from virtually everyone directly next to me.

At some point, the energy of the show and the crowd shot upward, due mostly to Alexis’s need to get past the security guys and get into the crowd. After affectionately rubbing her hand on the top of one security member’s bald head — he smiled from ear to ear, in between bobbing his head to the music — Alexis finally made her way to that barrier we all hate at shows, and with a little assistance she jumped it. A crowd surfing Alexis continued to sing into the mic as I’m sure a lot of very happy dudes were placing their hands in spots they never would get to see.

Just as she had made her way back to the stage, a fan from that center crowd handed her a t-shirt, and what does she do with it? Well, she strips off her own shirt in the middle of a song to put the fan’s shirt on, of course. A very brave move, if you ask me; hopefully it was a clean one and not someone’s sweaty seconds. The theme of the night turned to “Let’s dress up Alexis” as me and my friend handed guitarist Derek a San Diego baseball hat. He proudly strutted to center stage and popped it onto their lead singer’s head.

The spontaneity and roll-with-the-punches mood of the band was just as exciting as their music, and the crowd really went crazy for it. Or maybe they were going crazy for Alexis stripping off her shirt. Either way, it was energy that held true after they had left the stage, and a small group of diehards waited patiently to get an encore. Sleigh Bells didn’t play one. Instead, they popped out from backstage to come hang with their fans. Derek walked out and the first thing he did was run up to me and my guest and ask him, “Hey man, did you get your hat back?”

We then proceeded to chat with him, (we even took a pretty embarrassing photo) before I made my way over to Alexis. I kind of skipped past a few of the people lingering near her and walked right up to her, complimented her on a great show, and after talking for a few moments she corralled the group over to the merch booth, wrapping her arms around my shoulder as we walked.

Once there, more photos commenced, and I had to buy a t-shirt (smart sales move, Alexis).  Now that I had a shirt, and had tried it on to make sure it fit, the next logical idea was to get a signature. I was ready to hand the shirt over to Alexis when she told me that I didn’t need to remove it, and proceeded to full hand my chest and sign the shirt.

“You have a nice chest.” Alexis said as she finished up her signature.

Can I die happy now? Not only did I get to witness an amazing, energy-filled show, I got to see just how down to earth the duo behind Sleigh Bells can be. They continued to chit chat with fans as if they were all old buddies, smiling genuinely at each compliment and really making the ending to this night worthwhile. An encore would have been amazing, but hey, getting fondled by Alexis Krauss is just as good, I guess.